With almost 50 million beneficiaries enrolled in the program, the Medicare prescription drug benefit (Part D) is considered by many to be a model of a successful government insurance program. Beneficiary premiums have declined 13.5% over the past 5 years, and most regions of the country have many prescription drug plan options for beneficiaries.

Despite these laudable outcomes, Part D is not perfect, and its age is showing as the prescription drug market has evolved. The Part D benefit supports patient access to self-administered medicines and also encourages continued innovation in treatments for many diseases; however, beneficiaries are increasingly facing affordability challenges at the pharmacy, partly due to the structure of the Part D benefit. 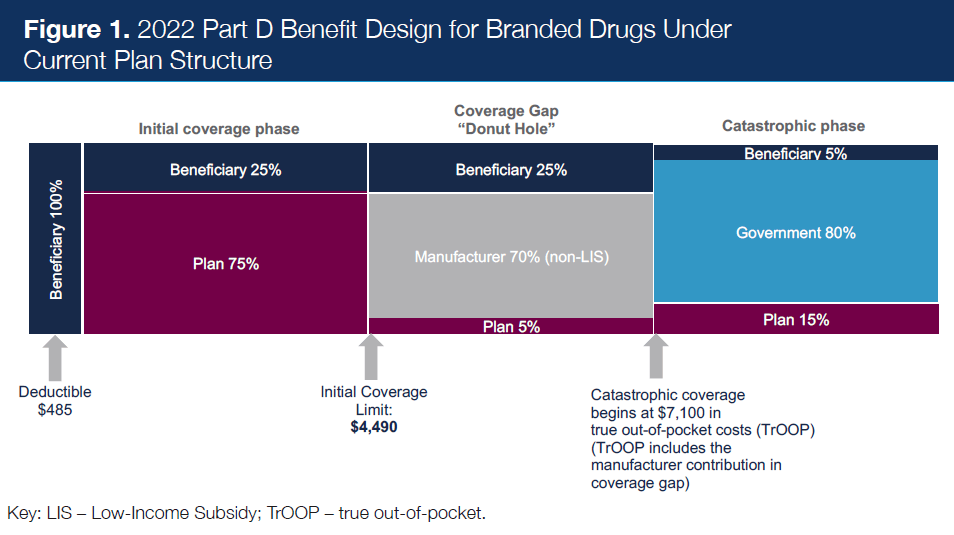 prescriptions, reductions, and delays in treatment initiation following a new diagnosis or disease progression, delays between refills or treatment interruptions, and earlier discontinuation of treatment. As seen in Figure 1, it is estimated that by 2022, beneficiaries would need to pay $7,100 in TrOOP (True out-of-pocket) costs before they would enter catastrophic coverage. Even after reaching this phase, beneficiaries would still face a 5% coinsurance, which could be hundreds, Key: LIS – Low-Income Subsidy; TrOOP – true out-of-pocket.if not thousands, of dollars a month for the rest of the year. In rare and ultra-rare diseases, those costs could be several times higher for patients with an acute need to treat the underlying condition and no other therapeutic alternatives. Due to these troubling findings, a number of policymakers and analysts have recommended revising the Part D benefit to reduce the OOP cost burden on beneficiaries. Recent Congressional proposals for Part D redesign include:

In December of 2019, the Senate Finance Committee approved PDPRA (Figure 2), which would include a deductible and then 20% coinsurance from the beneficiary until he or she reaches the catastrophic-coverage phase, much like the current Part D benefit design. The plan would be responsible for 73% of the costs in the initial coverage phase. Manufacturers of branded products would pick up 7% of the costs for all beneficiaries taking their products, including those receiving the Low-Income Subsidy (LIS). Beneficiaries under PDPRA would reach catastrophic coverage after $3,100 in OOP costs. And, once in the catastrophic coverage phase, beneficiaries would have no coinsurance responsibilities, with the federal government (20%), manufacturers (14%), and health plans (66%) sharing the costs.

Much like the current Part D benefit, H.R. 3 (Figure 3) also has a deductible and 25% coinsurance by the beneficiary until he or she reaches the catastrophic-coverage phase. However, H.R. 3 would have the manufacturer pay for 10% and plan pay for 65% of the branded drug costs in the initial coverage phase. This breakdown would be the same for both LIS and non-LIS beneficiaries.

Beneficiaries under H.R. 3 would enter the catastrophic-coverage phase after $2,000 in OOP costs, sooner than both the current design and the PDPRA. At this point, the beneficiary would not face any more cost-sharing responsibilities that year in Part D. The federal government (20%), manufacturer (30%), and plan (50%) would share the costs in the catastrophic coverage phase. This 30% manufacturer contribution would continue for the remainder of the year and can be significantly higher than the capped 70% coverage gap contribution currently seen in the Part D benefit for the manufacturer contribution.

In addition to Part D redesign, Title 1 of H.R. 3 includes negotiation of prescription drugs (for Medicare and commercial) using international prices to set minimum and maximum prices. If manufacturers do not negotiate or agree to the prices set forth by the government, they would be subject to excise tax (up to 95%) on sales of these products.

H.R. 19 (Figure 4) is the Republican response to H.R. 3. Similar to that bill, H.R. 19 caps Part D OOP spending for beneficiaries; however, rather than a $2,000 cap, it mirrors the Senate Finance Committee proposal with a cap of $3,100. But the bill does seek to reduce beneficiary cost-sharing during the initial coverage phase down to 15% compared to the current 25%. The manufacturer contribution would be 10% for all branded drugs after the beneficiary’s deductible.

Plan responsibility would be at 75% during the initial coverage phase and 70% during the catastrophic phase.

All 3 proposals would provide a cap on OOP costs to patients, improving patient affordability compared to the current Part D benefit design; however, these improvements are paired with other changes could have a material impact on manufacturers and the long-term incentive to innovate in certain therapeutic areas.

In 2020 under the current Part D benefit design, the most that a drug manufacturer will be required to pay in coverage gap rebates for a single drug is $3,698. However, under all 3 of these proposals, manufacturer liability would no longer be capped. The more expensive the drug, the greater the contribution required. It is also possible that some manufacturers would pay less in the proposed models compared to their obligations under the current Coverage Gap Discount Program because the proposed discounts in the catastrophic phase are not capped.

It should be noted that treatments for rare diseases are an inherently different market than for chronic diseases. There is a small set of patients for whom rare disease prescriptions are appropriate, compared to the millions of Americans who may be taking medications for chronic conditions. And while this makes the market for these products more fragile, with limited potential growth year over year, they are often seen by manufacturers (and patients) as meeting a critical unmet need. This is a marketplace that needs to be nurtured, not decimated, by unintended consequences.

To highlight these impacts, Xcenda conducted an analysis of potential manufacturer contributions for branded type 2 insulin, as well as various orphan-indicated products compared to the current baseline.

As seen in Table 1, manufacturer contributions for branded insulins would decrease by 51% in the Senate Finance proposed Part D redesign, whereas the manufacturers of orphan-designated products for pulmonary hypertension would see their contributions increase by 804%. Rather than an almost $18 million cost under the current Medicare Part D plan, pulmonary hypertension manufacturers would face over $162 million a year in the Senate Finance proposal and over $352 million in H.R. 3. These are often smaller companies that either specialize in the rare disease space or have only 1 or 2 products on the market and now must suddenly absorb these types of costs in addition to any other changes that might result from other provisions of the legislation.

These findings are consistent with recent work by the Medicare Payment Advisory Commission (MedPAC), which estimated that shifting the manufacturer rebate from the coverage gap to the catastrophic phase would result in decreased manufacturer contributions from diabetes and respiratory medicines compared to the current Coverage Gap Discount Program, while the costs borne by other medicines would increase.

The long-term effects of these shifts on the development of treatments for patients with rare diseases could be devastating. Given the knowledge that therapies like the example orphan-indicated drugs shown above will have a lower return on investment, investors are likely to shift some of their research funding elsewhere. This reallocation of investment has the potential to reduce the number of successful drugs and impede progress.

Incentives matter. Lawmakers need to exercise caution and remove emotions from such important decisions. The life sciences industry includes rare disease organizations that are very diverse with innovation being driven in companies ranging from family foundations to emerging companies with 1 or 2 products on the market. The economics of such endeavors are very different than mass-market, chronic care companies. Yes, there is a loud contingent of people who are clamoring for lower drug prices, but such decisions can also have far-reaching and less-obvious consequences that can be downright harmful—with the government essentially picking “winners” and “losers” in terms of investment in disease treatment. This analysis shows that policymakers need to be rational and understand basic economic principles about impacting rare disease companies that will affect the lives of millions of people.